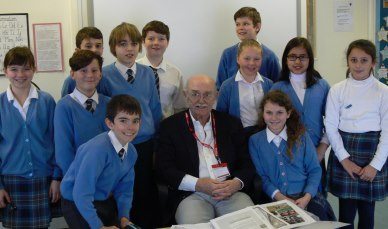 Thank you to Charlotte’s Grandad for visiting Year 6 this week and sharing his memories of war time with them. Two pupils have now written reports about the visit.

‘Charlotte Groom’s Grandfather called John came into talk about his experience as a child during the Second World War. It was very fascinating to hear that he was not evacuated, instead he went to a riding school where he could ride all day long in the tranquil place. He also said that when he was a child he heard a bomb called the doodlebug. It was lovely to hear him talk to us!’
Harry Butterworth, Year 6 :

‘On 22nd February, Year 6 had a visit from Charlotte Groom’s grandfather, John.  He came in to tell us of his experiences as an evacuee child during World War II.  Unlike some children who were evacuated, John has some very fond memories of that time which he was happy to share with us.  He was seven years old when he was evacuated to Epping Riding School by Epping Forest.  He was given a horse to look after and ride every day which he loved to do.  He made friends with a young girl there and they enjoyed riding their horses in the forest together.  His evacuee hosts were very welcoming and friendly.  They taught the children at the riding school so they didn’t even have to go to a normal school!

It was really interesting for Year 6 to hear of John’s experiences and he helped us to understand what it must have been like.  It would be nice for John to visit again as I’m sure he has many more stories to tell.’